Public data are collected because they are essential to government function. Whether or not they are freely available to the general public varies between governments. Here we explore what public data are and the implications of charging for data in terms of cost recovery and impacts on data usage.

What are public data?

Public data are collected by federal, state, and local governments. Common public data include geospatial (parcels and roads), demographic (census), meteorological, and hydrologic data. Public data of particular interest to the Internet of Water are those non-personal data relevant to creating a water budget (quality, quantity, and use). The importance of public data, and the infrastructure to deliver those data, continue to grow with the rapid development of an ‘information’ economy. And yet, limited funding has made it difficult for public agencies to develop and maintain a robust data infrastructure to keep pace with technology. Technology has profoundly changed how data are collected and disseminated (Table 1). To maximize data usage and impact, there must be investment in the underlying data infrastructure.

Table 1: Paradigm shift from a traditional to an information-based economy (adapted from Uhlir et al. 2015).

Public data are collected because they are essential for government function. For instance, the National Weather Service collects and disseminates weather data to protect lives and property as well as to benefit the economy. While the essential nature of the data requires public sector involvement, there is wide variation in government policies regarding how those data may be re-used by the general public and private industry.

To charge or not to charge for data

Secondary demand for public data exists because these data can be used to understand government, infrastructure, society, economy, nature, and so on. In the United States, public data are freely available by executive order. Arguments favoring this approach include:

Free data are used more. There are repeated instances where organizations have ceased charging for data and have seen an increase in data usage. The U.S. Geological Survey (USGS) saw a 43% increase in new users after they stopped charging for access to Landsat imagery in 2008. The number of downloads doubled from the Australia Bureau of Statistics when data were made freely available in 2005.

Conversely, when a charge is associated with data, usage decreases. Several studies have compared the U.S. (free data access) with Europe (charge for data access) and found that public data in the U.S. has a benefit of $39 for every $1 spent, compared with a benefit of $7 in Europe (Table 2). The challenge is that increased usage and value creation does not necessarily translate to revenue support for these public agencies. With tighter budgets, many agencies are attempting to find ways to recover costs.

Table 2. Estimated cost and benefit of public data in Europe and the United States.

Restricting data access creates substantial administrative overhead, as well as hidden costs from lost opportunities, barriers to innovation, and sub-optimal data quality from limited use and accountability. One of the primary challenges is that public agencies incur costs to collect and disseminate data while secondary users receive most of the benefits. For instance, the Australian Bureau of Statistics lost $3.5M annually by making data freely available while producing between $6M and $25M annually in value for secondary users.

In general, cost recovery efforts for data have been met with limited success and unintended consequences because:

While there is a perception that data should be free, there is no such thing as free data. Water is free, but it costs money to collect, treat, and distribute water to users. Similarly, public data may be free, but it costs money to collect, manage, and disseminate data to users. The U.S. has an executive order to make data freely available, but public data may not reach their potential due to inadequate funding. Inadequate funding may result in low data usage because the data are not very discoverable, accessible, or usable. The Internet of Water aims to improve data infrastructure so that public water data moves from a market with low activity (sleeping) to an active market (dynamic) (Figure 1).

Instances where governments attempt to recover costs by charging for data access may result in lower usage because of the cost to secondary users (sleeping). Another possibility is that the costs are so prohibitive that public sector monopolies form, making limited use of the data relative to having many data users. A third option is that private sector markets emerge that collect their own data and forgo public data. None of these outcomes are ideal for water resources, particularly when addressing regional challenges that have formed over decades and cross multiple jurisdictions. 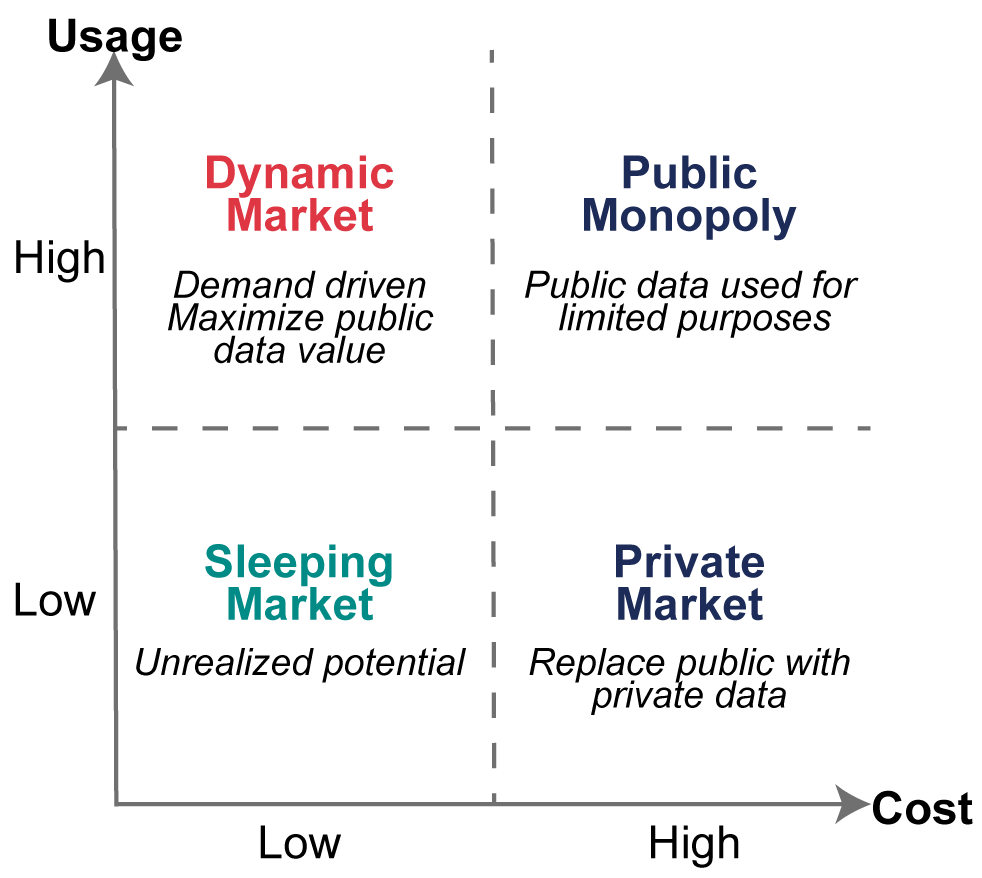 Figure 1: Markets that are likely to form based on cost and usage (impacted by discoverability, accessibility, and interoperability). Public data in the U.S. are typically free and will be on the spectrum between a sleeping and dynamic market.