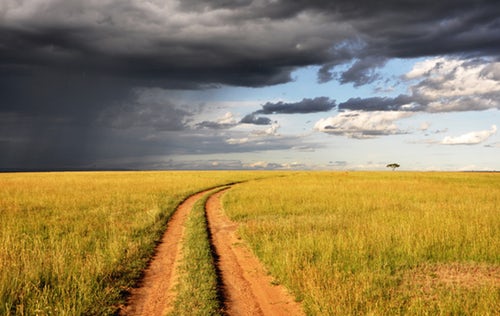 The National Weather Service is the primary source of public weather data and forecasts used to inform decision-making and mitigate losses from extreme weather. A willingness-to-pay survey and an impact analysis suggests the potential benefit-to-cost ratio is between $3 (includes forecasts from all federal and private agencies) and $15 (assumes most of the underlying data and forecasts come from the National Weather Service) of value for every $1 spent.

The National Weather Service’s (NWS) mission is to provide weather, hydrologic, and climate forecasts and warnings for the protection of life and property and the enhancement of the national economy. The NWS has 122 Weather Forecast Offices, 13 River Forecast Centers, 2 Tsunami Warning Centers, and 9 National Centers that are collecting data, generating forecasts, and disseminating information to government agencies, the private sector, and the general public.[1]

The NWS seeks to create a weather-ready nation by providing forecasts to inform day-to-day operations and decision support services to core partners in the public safety community (Figure 1).[2] NWS data are also used for research to produce more accurate and timely weather and hydrologic forecasts. Forecasts are used to inform a broad range of decisions such as what to wear, when to plant crops, when to implement water restrictions, when recreational use is possible, to inform on school closures, and to prioritize emergency response.

Figure 1: NWS data are transformed into information to support operations and decision-making.

Lazo et al. conducted a direct survey in 2006 to better understand how NWS forecasts were being used by the public.[3] The survey accounted for the entire value chain, not just the value of data. Looking at:

Lazo et al. found that 70% of the 1,520 respondents did not obtain forecasts directly from the NWS, but rather relied on local TV stations. Local TV stations are trusted “hubs,” which disseminate NWS forecasts widely and make them context relevant for their audience. Local governments, state governments, and the private sector all create and disseminate forecasts using NWS data that they tailor to meet the needs of specific audiences. Forecasts were viewed multiple times each day, leading the authors to estimate that 300 billion forecasts were obtained annually.

In terms of perceived quality, 75% of respondents were satisfied with forecasts, placing greater trust in near-term forecasts (e.g. 1 day out). Eighty-seven percent of forecasts were obtained for the respondent’s current location. The most valuable forecast (and data) addressed:

This means the most valuable forecasts are local, current or next day, and include precipitation, temperature, and wind speed.

In 2007, all federal agency spending on meteorological operations and research was $3.4 billion, with NWS accounting for 1/3 of the cost (NWS 2016-2017 was $1.12B)[1]. This included data collection, management, modeling, and disseminating forecasts. Extending beyond public agency efforts, the private sector was estimated to spend $1.7B on weather forecasting[3], leading to an overall cost of $5.1B.

Value of forecasts to the general public

The 2006 direct survey also used contingent valuation to estimate the willingness-to-pay (WTP) for forecast. Respondents were randomly presented 1 of 11 values ranging between $2 and $240 (Figure 2). The percent of respondents willing to pay at each price was plotted and a linear regression indicated that half of the respondents would be willing to pay $285.64 for forecasts[3]. The study estimated that with 110 million households willing to pay that price, forecasts are worth $31.5B (110 million households * $285.64). The willingness-to-pay suggests the benefit of forecasts is $6.2 for every $1 spent by federal agencies and private organizations (cost is $5.1B). Assuming the majority of the underlying data comes from the federal government ($3.4B), the benefit increases to $9.3 for every $1 spent. Assuming all forecasts eventually rely on NWS data ($1.12B), the benefit increases to $28.1 for every $1 spent on the NWS. 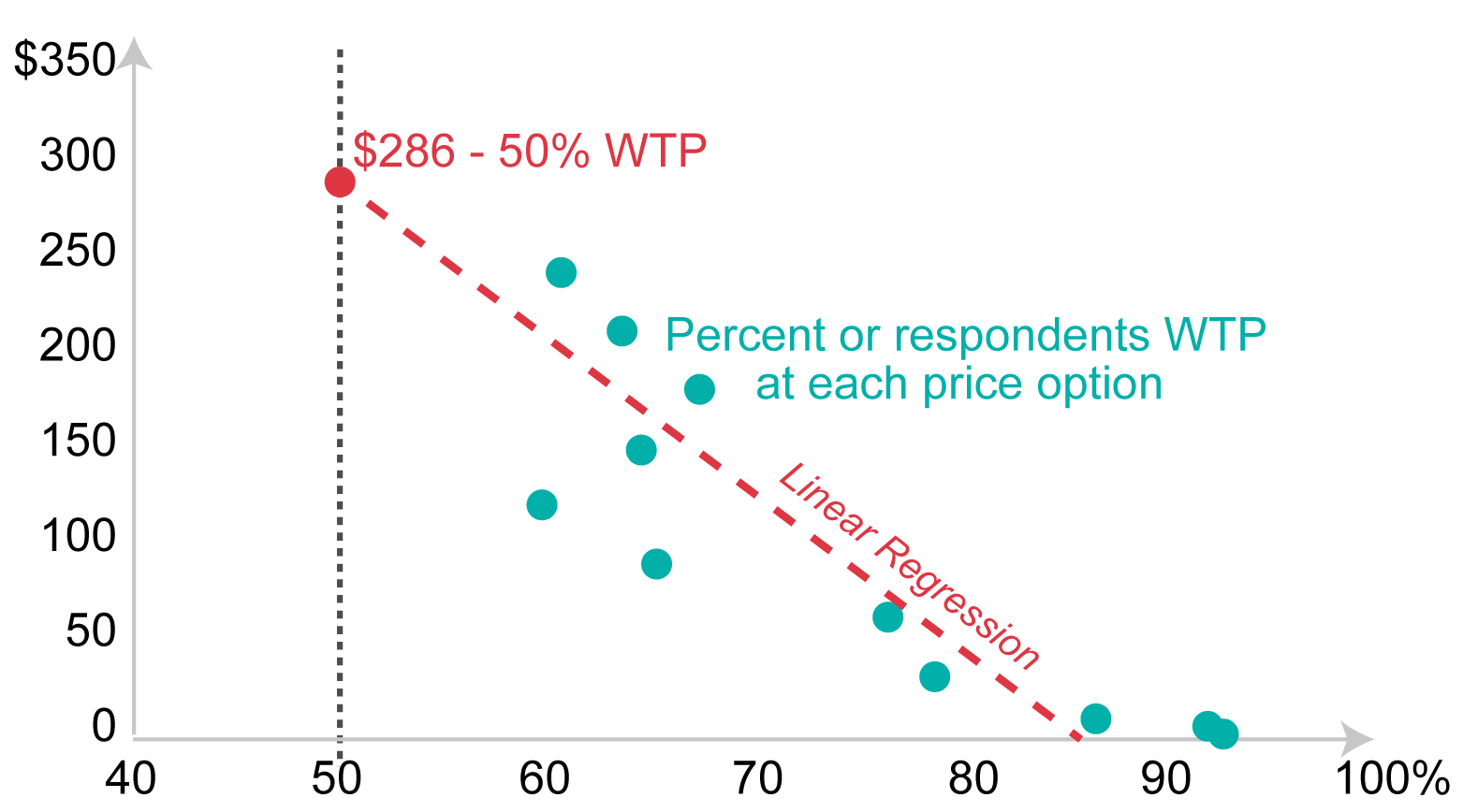 Figure 2: The percent of survey respondents willing-to-pay for forecasts at each price option. Half of the households would be willing to pay $286.[3]

Value of forecasts for economic activity and flood response

The NWS estimates their weather forecasts alone boost economic productivity by $13B annually [2], resulting in $11.6 benefits for every $1 spent.

In addition to enhancing economic activity, the NWS is also charged with protecting lives and property from extreme weather events. From 1980 to present, the average annual cost from extreme events was $40B.[4] Weather data, converted into early warning systems, can help reduce the impact of extreme events in terms of lives lost and property damage. In 2017, flooding alone accounted for ~$16B in damages (Figure 3)[4]. More accurate, earlier flood forecasts that can provide warnings at least 12 hours in advance have been estimated to reduce damages by 22%. If we assume NWS forecasts provided 12-hour advanced warning for all large flood events, then $4.51B were avoided in 2017 alone, producing benefits of $0.88 (federal agencies and private industry – $5.1B) to $4.03 (NWS only – $1.12B) in avoided costs for every $1 spent on forecasts. It should be noted, the federal government has been developing a National Water Model to provide nationwide river forecasts up to 18 hours in advance, potentially further reducing damages. 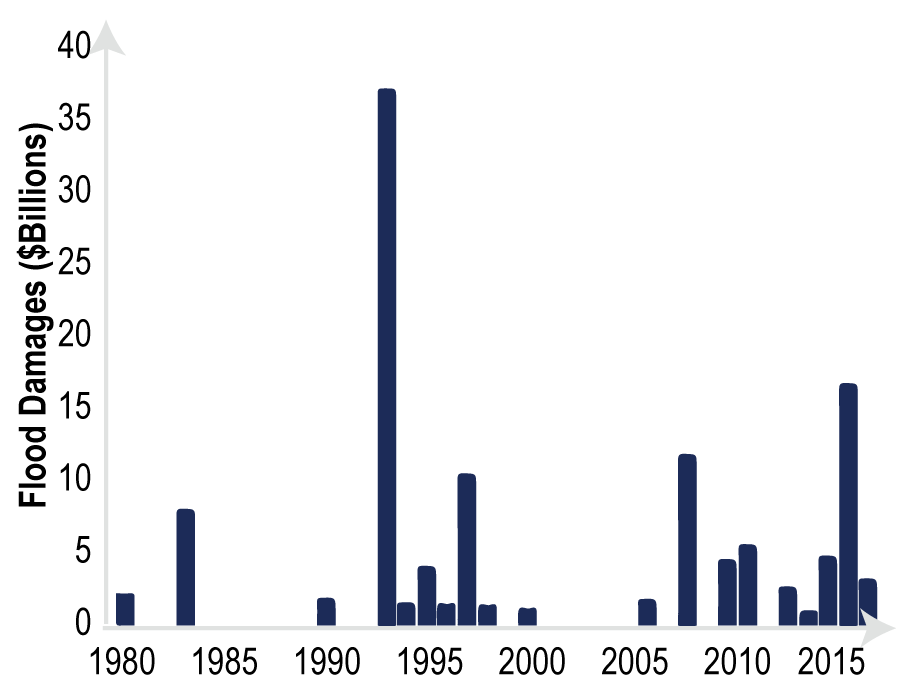 The combination of increased economic activity and avoided flood damage costs provides a benefit of between $3.43 (federal agencies and private industry) to $15.64 (NWS only) for every $1 spent (Figure 4). This valuation is a little lower than the WTP survey estimate; however, the full impact of reduced damages to life and property from other extreme weather events (such as tornados and hurricanes) were not considered. Because most decision-makers receive their forecast information outside of NWS, the actual benefit to cost ratio should include all federal and private efforts. 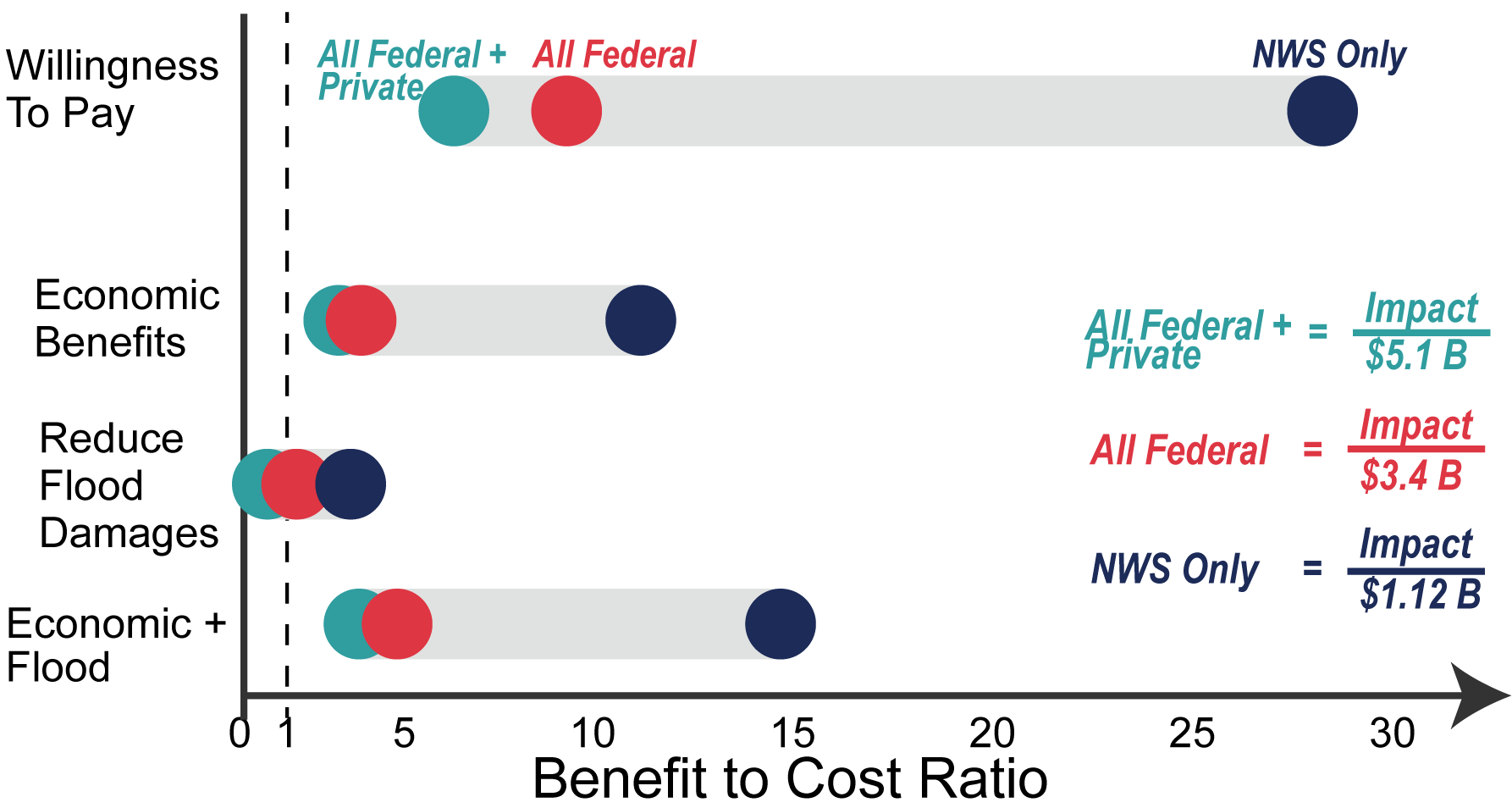 While there is tremendous value in weather data, that value is largely accrued outside of the federal government, highlighting the difficulty of data producers and hubs recouping their investment costs when data are shared and benefit is accrued by secondary users. The value of data is not purely economic as the benefit to society can justify the costs to collect and share public data. Clearly, the data collected, and the forecasts produced, by NWS are essential to the meeting their mission and the public good.